Lalit Modi, the former Indian Premier League (IPL) Chairman who has taken refuge in London has an axe to grind with anybody who has anything to do with BCCI. Modi had dug out an interesting picture from his archives that shows Arun Jaitley (an integral part of BCCI) with Priyanka Vadra, Rahul Gandhi and Robert Vadra having a great time watching a cricket match. The photograph seem years old as all of them in the photograph look much younger than now. Lalit Modi also Tweets – “A family that plays together, stays together”. 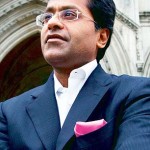 Arun Jaitley has been making snide remarks on the Gandhi family and particularly about Robert Vadra’s sudden riches in his election campaign. Lalit Modi takes a dig on that and Tweets, “Why won’t Arun Jaitley file anything against the 1st family – because he is part of that happy family”. Kapil Sibal and Digvijay Singh have been daring Arun Jaitley to file a FIR or go to the court if Jaitley feels Vadra has made money through illegal means. Modi is surely responding to that.

Lalit Modi also highlights that the photograph is not photoshopped and that it is from his photo archives.

Dear designers, if you are doing the shows for IPL Nights, I sincerely think you should pull out, until and unless you getting paid for it. It is a tasteless tamasha where fashion is just an excuse to show legs and tits. Any self-respecting designer wouldn’t like a mockery of his work and IPL Nights […]

Can you identify this guy posing as a Matador and an Afro Rockstar? Well as per sources, this guy has made millions lately through his real estate deals. People say that whichever piece of land he touches, it turns into gold. Some Midas Touch this bloke got!

A Model And Her Hotelier Beau

She is one of India’s supermodel and has the prettiest face in the glam industry. Yes we are talking about Indrani Dasgupta. Indrani and hotelier Karan Paul of the Apeejay Group are the hot-couple making the news in the capital. Karan Paul, brother of Priya and Preeti Paul of Apeejay Group that amongst other businesses […]

6 Replies to “Arun Jaitley & Robert Vadra Having A Ball”