Designer Manish Arora headed straight to Paris from London where he was honored by the Queen (and so were Rajesh Pratap Singh and couple other Indian designers) to have a ‘Cosmic Party’ on the runway at the Paris Fashion Week, Fall-Winter 2017. Arora’s “cosmic love” was inspired by the tribes in Africa. The head-wraps were typically African. His velvet embroidered booties and planet bags were well received. Though Manish is known for his attention to all things shiny and shimmery, it was Olivier Rousteing who went absolutely ‘glittery’ for his fall Balmain show. Balmain show was opulent and Rousteing’s maximalist look that comprised of dresses and tunics in elaborate patchworks of crystal mesh, jacquard, leather appliqué, embroidery, velvet, fringe and metallic studs that were paraded by the ‘Glamazons’. Yohji Yamamoto’s show was a tale of ‘Noir Romance’. Yamamoto used dark hued fabrics and draped, ruffled, pleated and superimposed them to create masterpieces. The only hints of color came in fuchsia and emerald green – either on the clothes, or on the models’ faces who had a David Bowie-ish look

Isabel Marant showed ‘Eighties’ is still going strong. She exploited the ‘Dynasty Shoulder’ action to the hilt but with a bohemian touch.The collection was spiced-up with classic Marant staples, like quilting on velvet tops and jackets, and updates on her signature oversize tailored jackets, cinched with wide suede belts, which kept the look light, feminine and fluid.

By the way wide belts, cinched waists are proof of ‘The Return of the Silhouette’. 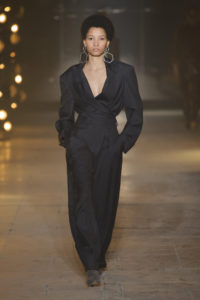 Manish Arora showed sequin dresses, cage-like bodices and slim neon pants depicting ‘Alien Beauties’ at the Paris Fashion Week Spring/Summer 2012. Models walked the runway with tribal-inspired makeup. A mix of metallics and neon made the collection rather dramatic but Manish claims to have kept the look ‘Quiet’ and stated, “I’m keeping the crazy but it’s a […]

Here’s some more on Paco Rabanne, the doyen of unwearable and bizarre designs. Former model and now the French First Lady, Carla Bruni walked for Paco Rabanne in 1995. Look at the picture below of Carla Bruni in one of Rabanne’s daring designs.While browsing through Rabanne’s historical creations, it doesn’t come as a surprise why […]

It was a satisfying day – the Day 3 at PCJ Delhi Couture Week 2012. Anju Modi’s Indian Couture and Manish Arora’s Global Couture were exhilarating. Thanks to Manish, we got a much-needed break from saree, shararas and lehengas. I strongly suggest my colleagues and peers to discard ‘press release’ so that one has an […]