Affairs of Lutyen’s Delhi interests many. It also irks the volatile Editor-in-Chief of an English News Channel. But I am talking about likely romance blooming between a Lutyen’s lady and a NRI globetrotter.

Savitri Singh of the DLF Group who handles the Lodhi Hotel and DLF Emporio and much more is dating the globetrotting ex-model and ex beau of Sonam Kapoor, Sahir Berry. Son of Binoy Berry, Sahir is the CEO of AfriOne and in April 2017 unveiled its manufacturing and assembly plant for ‘Made in Nigeria’ phones and other technological devices, and declared readiness for create jobs and other social economic benefits.Savitri Singh is Delhi based and much is known about the family she hails from – the DLF Group. 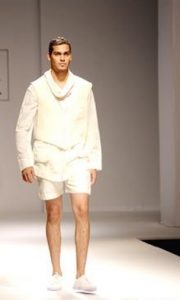 Sahir divides his time between Delhi, London and Goa, and it is this globetrotting life of his that led to the breakup of his affair with Sonam Kapoor. After getting a degree in the US, Sahir did a course in international business from London. He then took a sabbatical and returned to Goa to dabble in modelling. Sahir Berry’s elder brother, Roheen Berry  is the Managing Director of Contec Global. He is an automobile connoisseur and is the owner and CEO of boutique sports car – Wiesmann Sports Cars GmbH alonwith brother Sahir

Seems Savitri Singh and Sahir Berry makes for a good match. Next-Gens of two equally big corporate houses – DLF Group and Contec Group might lead to joint-ventures along side romance. Who knows what’s in store for the future??? Sonam’s Boobs Were Too Big For The Gaultier Gown

Sonam Kapoor’s Big Boobies made more news than the movie Players at its Dubai Premiere. The Jean Paul Gaultier gown that Sonam wore to the Premier of Players in Dubai was from Gautier’s Fall 2011 Couture Collection and if you look closely the bust of the gown is conical.  When Gaultier made the iconic cone-bra […]

Arrogant behavior of staff employed with international luxury labels in India seems to be a common pain that customers have to bear. To sell ‘Haute Couture’ does one need to be ‘Hauteur’? Bull-crap! In fact humility gets you more customer than being haughty. All the fancy brands housed in DLF Emporio cheat customers by sending […]

Folks in these sombre times I felt like talking about some light-hearted goss and the future of ‘muah muah’ soiree. Believe you me, you may love the society soiree(s), you may hate them but you just can’t ignore them. I am not trying to be a social zeitgeist but just wondering how would those dramatic […]