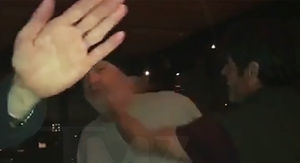 Harvey Weinstein was on the receiving end of two backhanded slaps to the face onTuesday night at Elements restaurant in Scottsdale, Arizona. Harvey Weinstein’s name has become synonymous with sexual assault after years of alleged misconduct led to dozens of accusations from high profile actresses. His outing sparked a ripple of change over Hollywood, an industry […]